Super Junior kick-off their comeback with a new MV

Super Junior kick-off their comeback with a new MV

Before Super Junior release their comeback album ‘PLAY‘ and title track ‘Black Suit’ on November 6, the group has released ‘One More Chance’ an emotional powerhouse of a ballad.

The track was composed by member Donghae and has a melodic appeal with a hint of pop influence that is something you would expect from a group who has a back catalogue as full of hits as Super Junior.  It perfectly blends and balances the vocals of the members to give us the end result which is a stunning track to mark the return of one of the strongest vocal groups in K-pop.

The song steers clear of the current batch of beat drops and over-production, and that’s new in itself!  It not only ensures the song truly fits in with their repertoire and personalities, but is imbued with an understated power that makes it remarkable.

Along with the new music video, Super Junior have also released a further timeline for their comeback.  Looks like we’re going to get a lot more teasers between now and the release date of ‘PLAY‘. 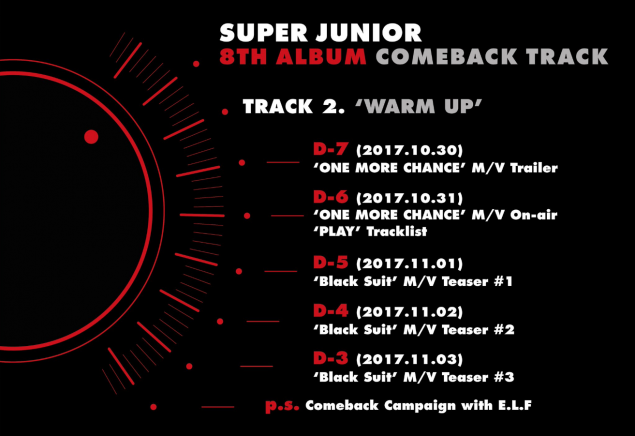 Super Junior have announced that Siwon will not be participating in the group’s comeback promotions.

In a statement, Label SJ said, “Hello, this is Label SJ. We are relaying a piece of disappointing news to the fans who have been greatly looking forward to Super Junior’s long-awaited comeback.”

“Siwon will sadly not be participating in Super Junior’s broadcast promotions after their comeback on November 6th with 8th album ‘Play‘.”

” We apologize to everyone who has been waiting dearly for their comeback, and ask for continued support for Super Junior’s new album. Thank you.”

No further information has been provided as yet and nothing has been confirmed in relation to the group’s upcoming concerts in December.

Super Junior’s Siwon will be sitting out promotions for ‘PLAY’

Super Junior will make their official comeback on November 6 with their eighth album ‘PLAY‘ and title track ‘Black Suit’.

What do you think of ‘One More Chance’?  Are you excited to hear the rest of ‘PLAY’?  Let us know in the comments below.

Keep up to date with the latest in K-pop with Officially Kmusic.