SHINHWA are showing us their ‘Heart’ with new comeback details

SHINHWA are showing us their ‘Heart’ with new comeback details

SHINHWA has released the track list for their upcoming special album release ‘Heart’.

The special album is part of their ‘All Your 2018‘ 20th anniversary project which will continue through the remainder of 2018.  The album ‘Heart‘ is scheduled for release on August 28 and will be followed by a concert (also called ‘Heart‘) in Seoul on October 6 and 7.

The track listing for the album reveals that there will be a total of six songs on the album, including the title track ‘Kiss Me Like That‘.  Other songs include ‘In The Air‘ which will feature Yoon Mi Rae, ‘Level’, ‘Here I Come’, ‘L.U.V‘, and ‘Don’t Leave Me‘.

The image that accompanies the title track continues with the dream-like imagery that we saw in the individual teaser shots, this feeling is only heightened by all the members wearing white. 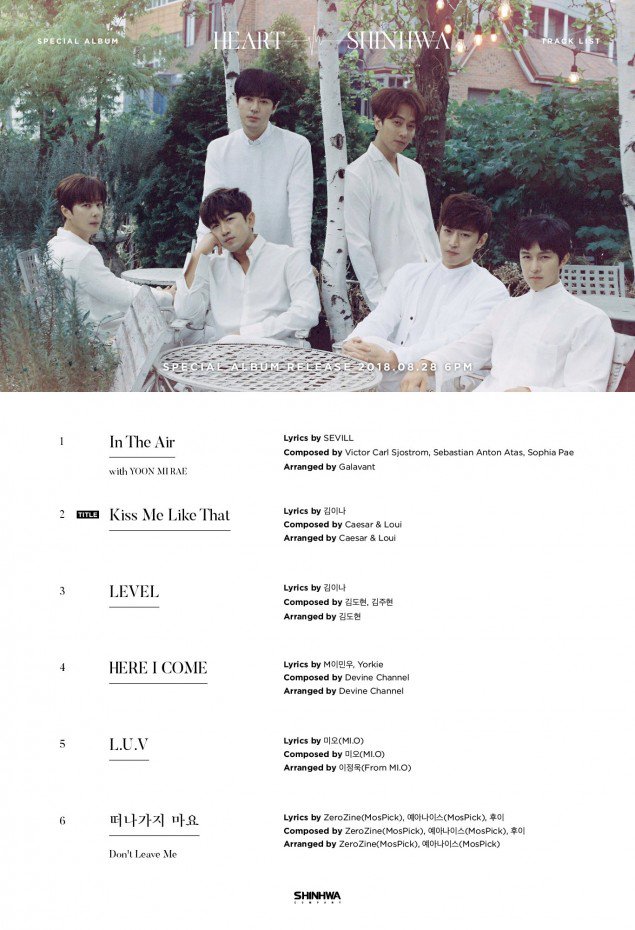 SHINHWA‘s special album ‘HEART‘ is scheduled for release on August 28.

Are you excited for SHINHWA‘s comeback?  What do you think of the track listing?  Let us know your thoughts in the comments below.

Scroll for more
Tap
(G)I-DLE execute the cool concept perfectly in new MV for ‘HANN’
Want a sneaky listen to ‘Bout You’ from Super Junior D&E – yep, us too!
Scroll