Just a few hours to go before KNK make their comeback and it’s already a bitter sweet time for fans. The group just released an amazing teaser video for their comeback single ‘U‘. With various shots of powerful, knife-like choreography to old film transitions, and even shots of the members clad in full black, the teaser left you wanting to see more. Coupled with the rapid tempo of this dance track and impressive vocals from Inseong singing “I need you, come back to me“, anticipating the actual music video would be all that’s left to do.

Check out the teaser below:

Unfortunately, the twelve second teaser is where it ends. YNB Entertainment issued a statement about the cancellation of the release of the ‘U’ music video due to their dissatisfaction with its quality. Below is a translation of that statement: 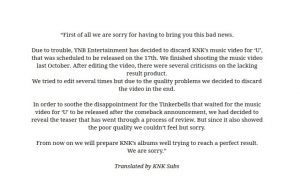 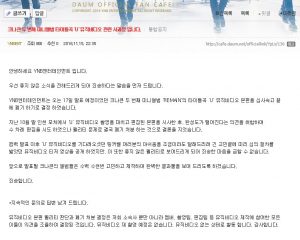 It seems KNK will be promoting without a music video this comeback season, which leaves a lot of questions as to how this will affect them. The title track itself is clearly addictive and from the album preview, ‘Remain’ promises to be one of their best albums yet. From the glimpse of choreography we saw, KNK’s comeback stages will be nothing short of impressive.

Before KNK make their comeback, take the opportunity to catch up on their previous black and white version teasers.

Stay with Officially Kmusic as we keep you updated on the latest in Korean Entertaiment!