Jaejoong recently represented JYJ at the donation event of ‘UNICEF‘.

Recently, JYJ was appointed as the ambassadors of ‘KBEE 2012‘ and they said that they were going to donate funds from their own profit. But, sadly, Junsu and Yoochun didn’t make it to the event. Instead, Jaejoong made the fans feel their presence as he brought dolls that looked like them and made them sit on the table at the event. 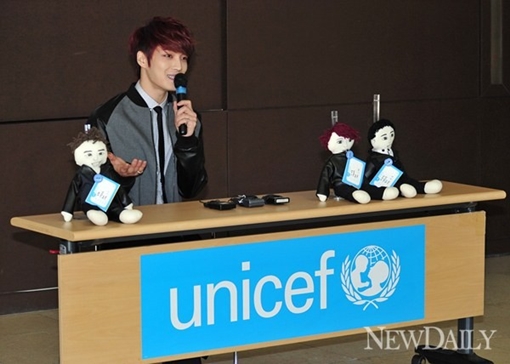 Jaejoong remarked, “We were happy to be together in a place of mutual communication for both Korea and Japan through KBEE last year. I want to have a chance to think about the people in need now. We want to send a small hand of comfort to all the children in need all over the world.”

Meanwhile, Jaejoong ranked first on the German Music Chart with ‘Mine‘.

Check out the video below!