Officially Kmusic would like to wish Monsta X a very happy debut anniversary! 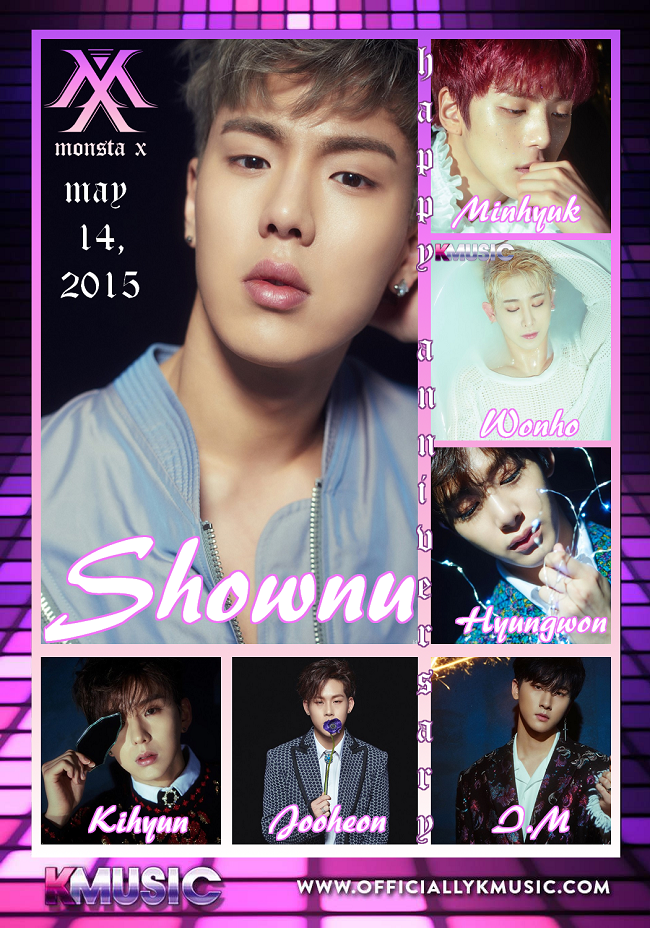 He’s a former JYPE trainee and would have debuted with GOT7; but left before they debuted.

He is still friends with GOT7.

He helps to create most of the chorography for the groups’ songs.

He changed his name to Shin Hoseok when he was an “ulzzang” (beautiful boy/beautiful girl) boy.

He can speak Japanese and French.

In the dorm he rooms with Hyungwon and Shownu.

He likes to eat and drink healthy food and drinks.

He’s known as the “mood-maker” of the group.

He is a trained chef and does most of the cooking for the group when they are at home.

He also writes a lot of the groups’ songs.

He is known as the “mom” of the group.

When he was on Masked Singer the fans knew it was him right away.

He used to be a fashion model before joining Monsta X.

He used to work at his parents traveling agency when he was younger.

Jooheon (Lee Jooheon (이주헌)) was born on October 6, 1994 in Daegu; but was raised in Seoul from a young age.

He was in one of Mad Clown’s music videos when he was a trainee and is still friends with him; however due their contract stating that they can only have personal cell phones after they get first place on a major music show; he can only communicate with him (as well as his friends and family) through email.

He put out a mixtape in 2016 and just recently put out a new song called “Future” on his Soundcloud account.

He likes using the hashtag #honeyplayer when he posts on Monsta X’s social media.

He can speak Japanese and English.

Due to his father’s work as a scientist; he lived abroad for many years of his life, including Boston, Massachusetts USA and Jerusalem, Israel.

He can speak fluent English.

His father is his role model.

He put out a mixtape before he joined Monsta X.

He and Jooheon help in writing a lot of the groups’ songs.

He’s good with science and wanted to be like his father when he was younger.

He has a habit of biting Shownu’s arms.

Wonho gave him the nickname “Kookang” which means “puppy.”

Things to know about Monsta X:

They were actually formed from the survival show called NO.MERCY.

Kihyun and Jooheon also did one of the OST songs for Orange Marmalade in 2016.

On June 18 they will start their first world tour, including stops in the US. This will be the first time they’ve been in the US outside of KCON.