Every day is Girl’s Day! Daisies bagged unforgettable moments on 21 Nov 2014 with their goddesses at the inaugural Kstar Fanfest 2014 in Singapore!

Performing as part of the two-day extravaganza and the grand finale of the two-month long Korea Festival 2014, Girl’s Day headlined the concert on the first day at the Marina Bay Sands Convention Hall, which will be followed by B1A4 on the next day.

Members Sojin, Minah, Yura and Hyeri got the stage overflowing with hotness, sweetness and laughter all in one night! But before that, Girl’s Day held a press conference joined by overjoyed fans. The girls enlivened the atmosphere as soon as they stepped out. Leader Sojin called out, “Thank you all for coming to see us! We are very happy and excited to meet you all right here at our first concert in Singapore.” 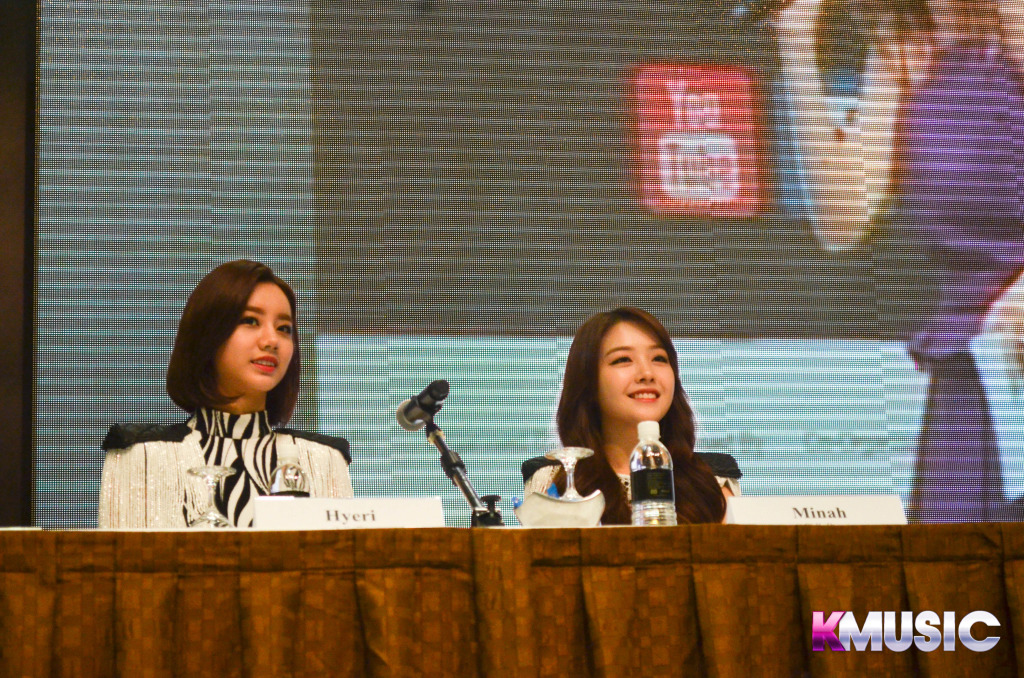 So what is the first thing Girl’s Day want to do on their maiden visit? Maknae Hyeri said that Singapore is one of the countries that she had wanted to visit and dropping by Universal Studios Singapore is on her bucket list. On the other hand, Minah quipped that she really wants to try Hallyu stars’ all-time favourite Singapore dish – chilli crab, which was met by fierce cheering and a sign that fans are more than willing to bring her for supper!

Drawing reference to their famous single ‘Female President’, the girls were asked what they would do if they could be a female president. Hyeri jokingly said, “I had always wanted to be the first female president of the Republic of Korea, but I am really happy to be a singer and glad to have achieved my dreams of becoming a singer.” She then added that she would want to set a day especially for females and call it Girl’s Day. For Sojin? She will ask everyone to be a Girl’s Day fan if she were the president! And nodding in agreement was Minah. 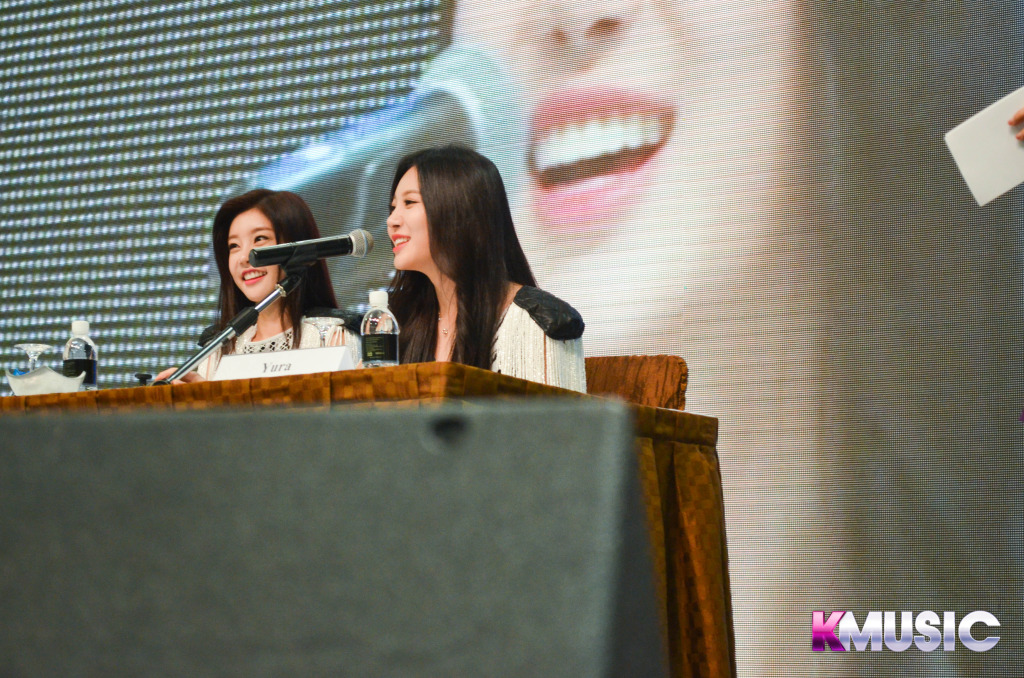 Speaking about members’ active participation in variety shows, Yura responded cheerfully that after her virtual marriage with Hong Jong Hyun on ‘We Got Married’, she became more feminine. She also hopes that female students could be able to learn some dating tips through the show. As for Hyeri who showed a different side of her while undergoing the strenuous trainings in ‘Real Men’, the 20-year-old shared that she is grateful to now gain attention from both male and female fans of different age groups.

Finally, since the girls are performing at an event relating to their home country, Girl’s Day was asked to describe something unique about Korea. The girl shared that Korea is a country that is filled with so much love, the atmosphere and feel in Korea is also a lot different as compared to Singapore, and there is a myriad of food to try! 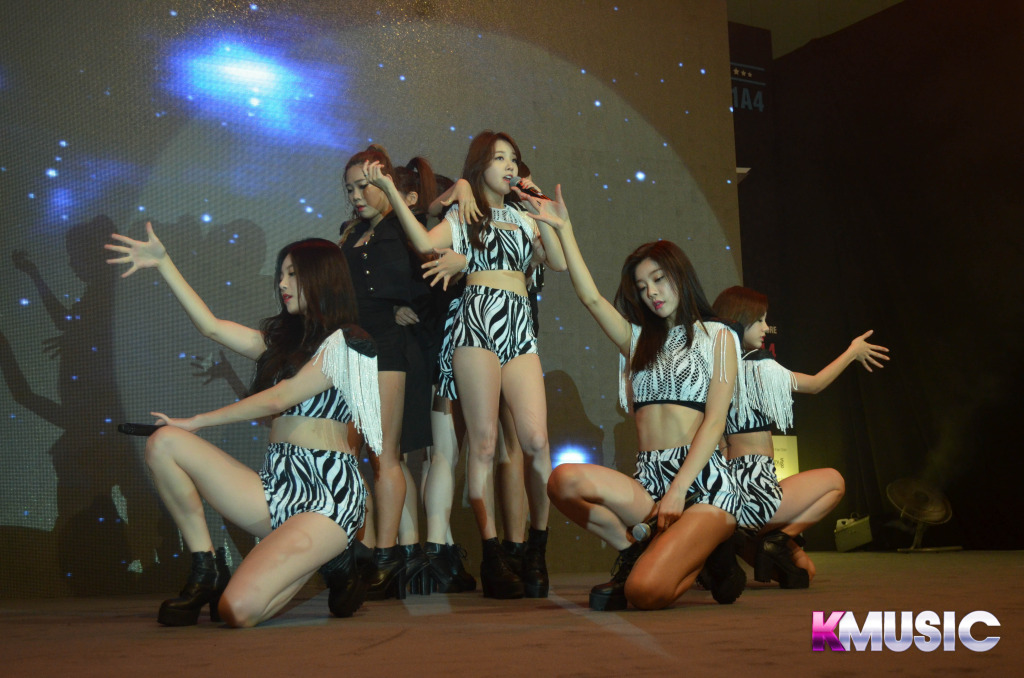 Couple of hours later, the girls got off on a powerful start to their concert with top hits – ‘Expectation’, ‘Female President’, ‘Something’ and ‘Don’t Forget Me’ that not only radiate sexiness through the dance routines, but also displayed the hardworking idols’ strong vocals. Fans were also thrilled to catch the girls performing live in their iconic zebra-print costumes seen in the MV of ‘Female President’, and swirling those cute long tails!

Greeting the ecstatic fans, Hyeri went “Singapore is fantastic, and beautiful!” Yura added that she really wish to visit the infinity pool atop Marina Bay Sands, and Minah got fans go crazy when she said that she wants to take a dip there right after the concert!

Answering questions from a couple of lucky fans, Yura revealed that she really loves to watch dramas and her ideal rest day is to stay home and binge on shows while her ideal man is someone who suits her, caring and can truly love her. It was amusing how fans in the audience immediately put up their hands in response!

One male fan put in quite a lot effort to pose his question in Korean and Minah thanked him while commenting, “You are so cute!” That probably made his day, week or month! To his question of how Girl’s Day maintains close relationship with one another, Hyeri said “We have been together for about three years, and so we have less conflicts since we now know each other well and loves each other like family.”

On the best moment of the year and hopes for the group, Girl’s Day shared, “It was when ‘Something’ gained so much love and did so well on various charts. We hope to always do our best and stick together as a team”, and Sojin’s sudden exclamation “Be a superstar!” certainly pleased the crowd judging from the booming cheering and clapping. And amongst the lucky fans who got the opportunity to take a group photo with Girl’s Day, we just have to give a shout-out to that brave male fan who wore that hilarious big daisy headwear! 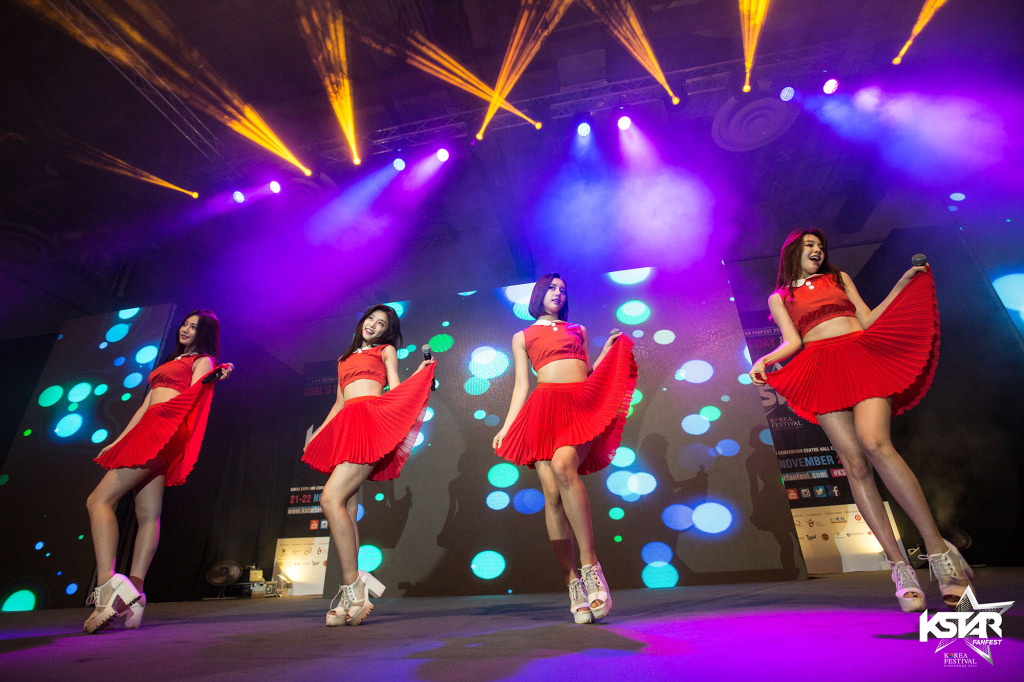 After a short break, Girl’s Day returned in adorable red outfits and treated fans to one of their latest singles, ‘Darling’ – such a cheery tune that even gets all your toes jazzing to the beat. Members   then continued to capture the hearts of their fans with ‘Tell Me’, ‘Hug Me Once’, ‘I Miss You’ and ‘Look At Me’ and tickled funny bones during the games segments.

During a game to test telepathy between members, Hyeri and Minah showed some great connection while Sojin and Yura were being ‘accused’ of cheating by using their lips to communicate. Minah’s ‘whining’ about her unnies was just too cute! Seeing the girls on their knees when trying to act out different animals and other categories during Charades was probably a first for many fans as well.

Girl’s Day capped off their maiden performance in Singapore with an encore of ‘Twinkle Twinkle’, complete with winks, waves and heart signs! Looking forward Girl’s Day next visit in town! 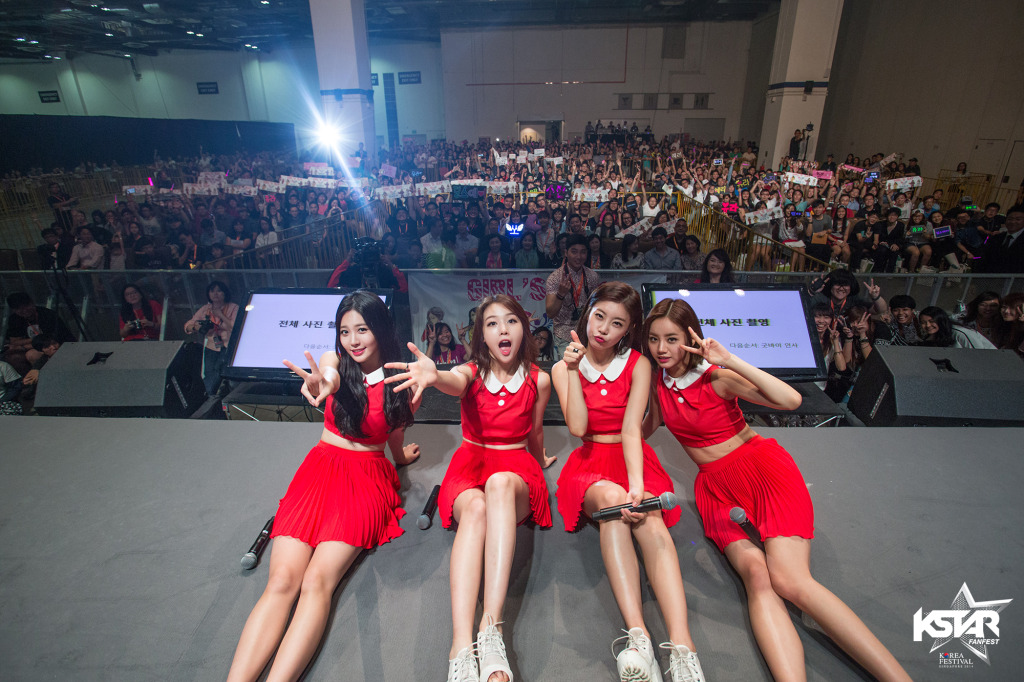 Officially KMUSIC would like to thank SPH Sphere Exhibits for the invitation.