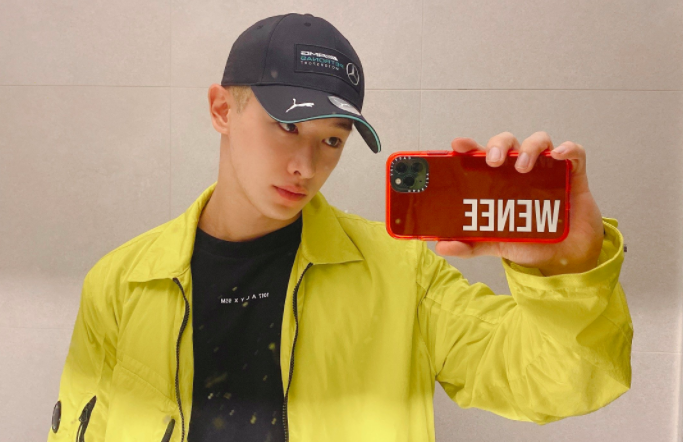 On August 7th, former MONSTA X member, WONHO revealed the logo for his upcoming solo debut. Two days later on August 9th, he dropped the first teaser for his debut mini album ‘Part 1 Love Synonym’. Check the logo and teasers out down below!

Looking at his logo, there are two versions. One is with his full name, written in a sharp and chic style font, placed behind a black backdrop. The other is a simplified version simply with his initials ‘WH’ with his name written all capitals in a classier, more regular font.

Moving on to the poster for his album, we know that this album will be a series in others to come since it is labelled ‘Part 1’. There is a sea blue backdrop with the soloist in the background, wearing a white button down and black V-neck shirt beneath. The title track is also revealed, being called ‘Right for Me’.

This album will mark a turning point in the singer’s career. This is the first music release he’ll be undertaking since his departure from boy group MONSTA X back in October 2019 due to rumours of him being involved with drugs, specifically Marijuana. However, the charges against these claims were cleared earlier this year in March. He is now signed under Highline Entertainment (a subsidiary of his former agency Starship Entertainment), as a singer and producer. Fans are then excited for his new musical direction and restart.

WONHO‘s 1st mini album, ‘Part 1 Love Synonym’, featuring the title track, ‘Right for Me’, will be released on September 4th!

How do you feel about his upcoming solo debut? Let us know in the comments below!