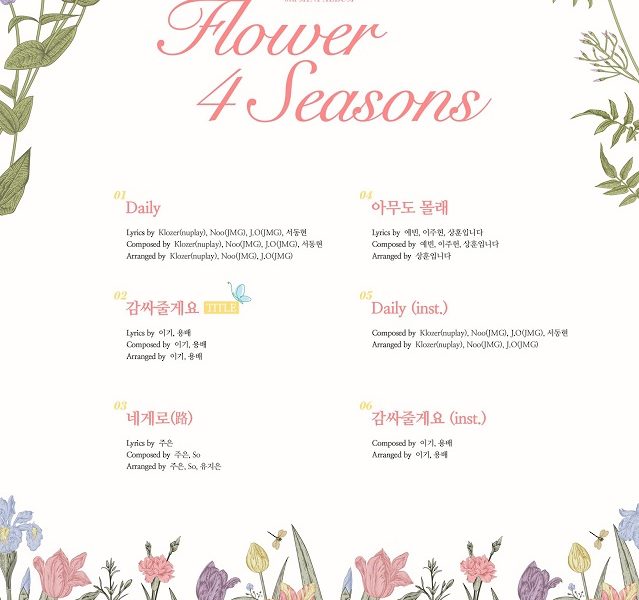 On May 28th, DIA released the track list for their 6th mini album, ‘Flower 4 Seasons’. Check it out below!

The album is set to contain six tracks which include two instrumentals of tracks within the album. The tracks include ‘Daily’, ‘I’ll Care For You’, ‘Way To You’, ‘Without Anyone Knowing’, then instrumentals former two tracks. There are members who made contributions to these tracks as well. Hence including member Yebin in ‘Without Anyone Knowing’ for its lyrics and composition, and Jooeun in ‘Way To You’ for its entirety from lyrics, composition, and arrangement.

The title track, ‘I’ll Care For You’ is produced by Iggy and Youngbae who also produced the group’s debut title track, ‘On The Road’ back in 2016. Furthermore, they have been known to have produced many of girl group GFriend‘s hits like ‘Navillera’ and ‘Rough’, as well as having produced for boy group ASTRO amongst other famous K-pop artists.

Below the track listing, there a flower bed of budding blooms filled with pastel colours. The painted old-timely feel of them also indicates a possible elegant concept for the group.

How do you feel about the track list? Let us know in the comments below!