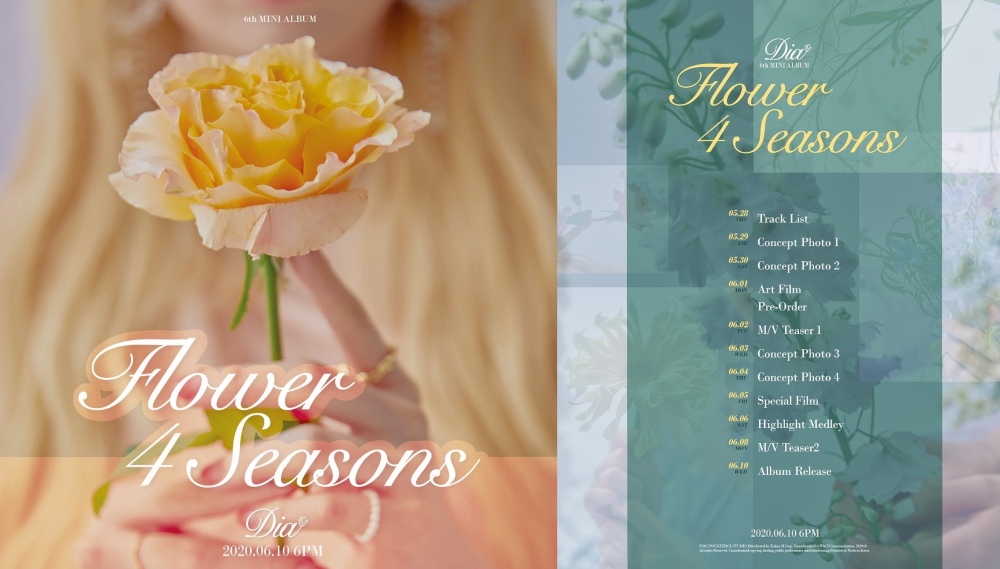 On May26th, DIA announced their musical return with their 6th mini album, ‘Flower 4 Seasons’. Just the following day on the 27th, they released the schedule for upcoming teasers leading up to their comeback. Check them out below!

The announcement teaser shows a delicate pink-yellow flower held by a member, with the font of the teaser indicating a more feminine and elegant concept for the group.

The schedule shows fans can look forward to many teasers in the coming days. These include a track list, four versions of concept photos, an art and special film, and two MV teasers before the album’s release. The group’s comeback has been long-awaited as their last comeback was back in March 2019, well over a year ago with their mini album, ‘Newtro’ and its title track ‘Woowa’. Furthermore, this comeback also marks the first since the departure of member Jenny who left due to ongoing health issues.

The group has usually stuck with a cuter concept however changed it up for their previous comeback to incorporate more girl crush and chic elements. It seems the group will once again change, and fans can be excited to see what concept they will tackle next.

DIA‘s 6th mini album, ‘Flower 4 Seasons‘ will be released on June 10th, 6PM KST! How do you feel about DIA‘s comeback announcement? Let us know in the comments below!