2NE1 may have sadly reached the end of their era, but we haven’t seen the last of the members just yet! Dara is back in the spotlight for her participation in ‘Pinoy Boyband Superstar‘, a Filipino singing survival show, as one of the judges.

The show started back in September and recently aired the first part of it’s ‘Grand Reveal Finale’ on December 9th. It was also during this episode that Dara performed ‘Kiss‘ and stunned both the crowd and fellow judges. 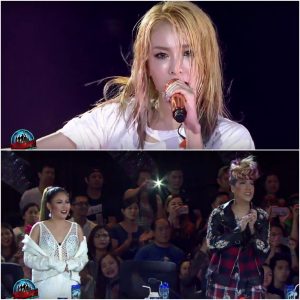 Her stage was nothing short of powerful and sexy, and she pulled of some great moves including balancing on the back of a chair with one hand! That was not all that made her stage so impressive but you will have to watch the performance to see exactly what I mean!

‘Kiss’ was released six years ago as Dara’s solo track and was used as part of her promotions for Oriental Brewery’s Cass Beer series. The song also featured CL as the rapper and saw Lee Minho starring in the music video. ‘Kiss’ did considerably well and placed at number 5 on the Gaon Chart.

After the official disbandment of 2NE1, YG revealed that Dara had signed a solo contract with them. This performance is definitely one of many great stages that we can anticipate from her in the future!

What did you think of Dara’s performance on the survival show?

Stay with Officially KMusic as we bring you the latest in Korean Music News!