As February 13th gets nearer, BTS is giving us another look into their upcoming album ‘Wings: You’ll Never Walk Alone‘. The latest in teaser releases is a track list for the album.

Including the original 13 tracks from ‘Wings‘, there are also 3 new songs! ‘Spring Day‘, ‘Not Today‘ and ‘A Supplementary Story: You Never Walk Alone‘ are the new titles this time. 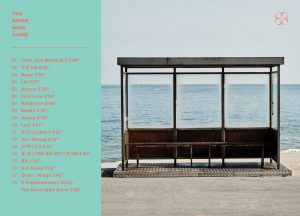 In contrast to the mature image BTS went with for ‘Wings’, they’re channeling a happier and lighter image for this follow up album. We got a one set of paint-splattered, confetti- showered concept photos, and then a second set staged near the seaside.

‘Wings: You’ll Never Walk Alone’ is set to release on February 13! Until then, be sure to check out those concept photos.

Stay with Officially KMusic as we bring you the latest news from the world of Korean Entertainment!